Other than research activities, time to time covered by Media (NewsPapers). 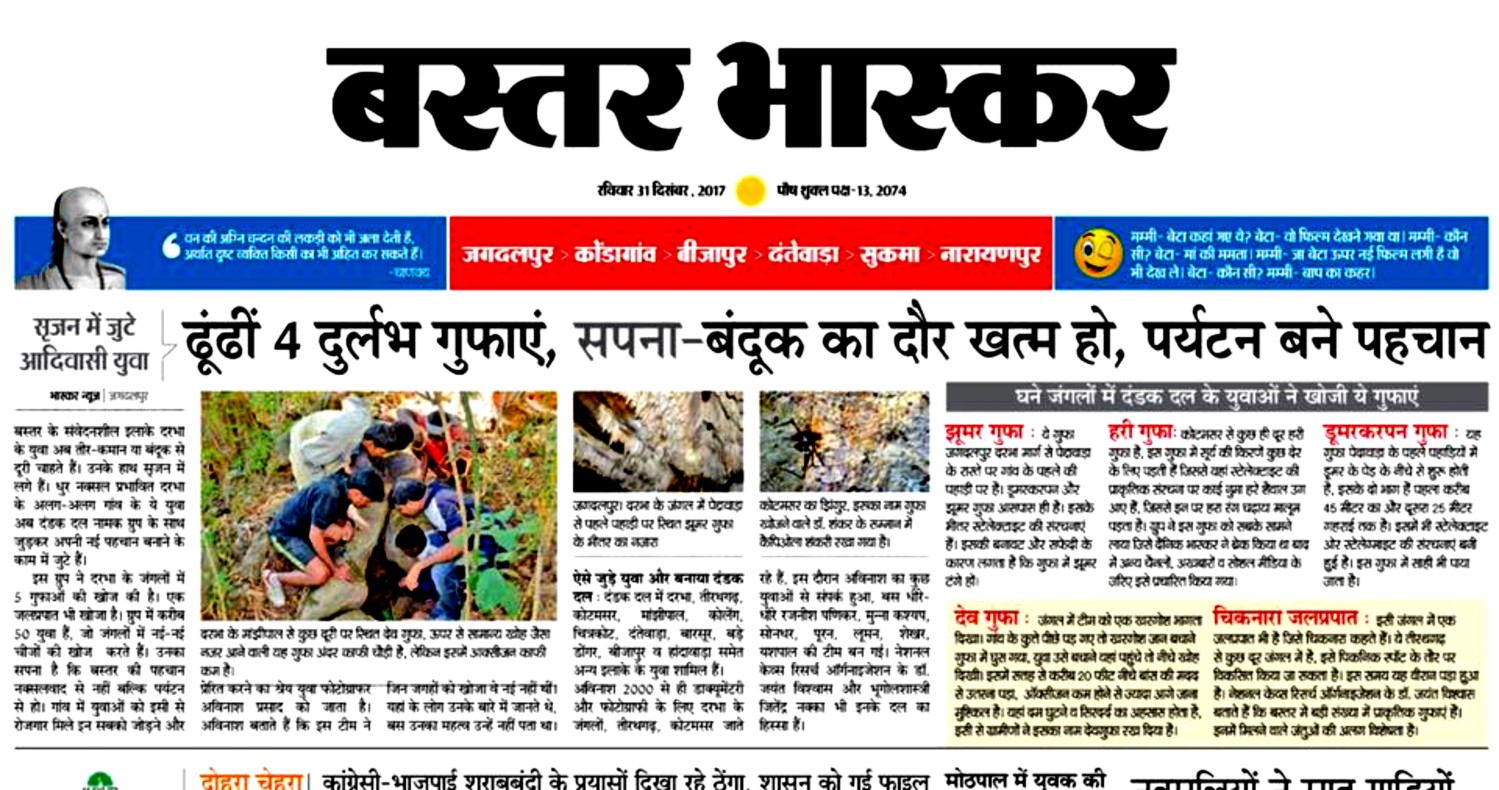 A satellite team for cave exploration is formed with the help of tribal youngsters. The team is working on the last few years to fetch new caves in the deep forests of Bastar region. It is the initiation of a good sign that the youngsters of Bastar have been involved in some creative work, which will definitely give them earning in the near future. Mr. Avinash Prasad of Jagdalpur named this team as Dandak Dal. Besides Jhumar & Hari gufa, recently this team explored Dev Gufa, Dumkaran gufa etc. This group is working under the technical guidance of Dr. Jayant Biswas and Mr. Jeetendra Nakka of “National Cave Research and Protection Organization, India”. 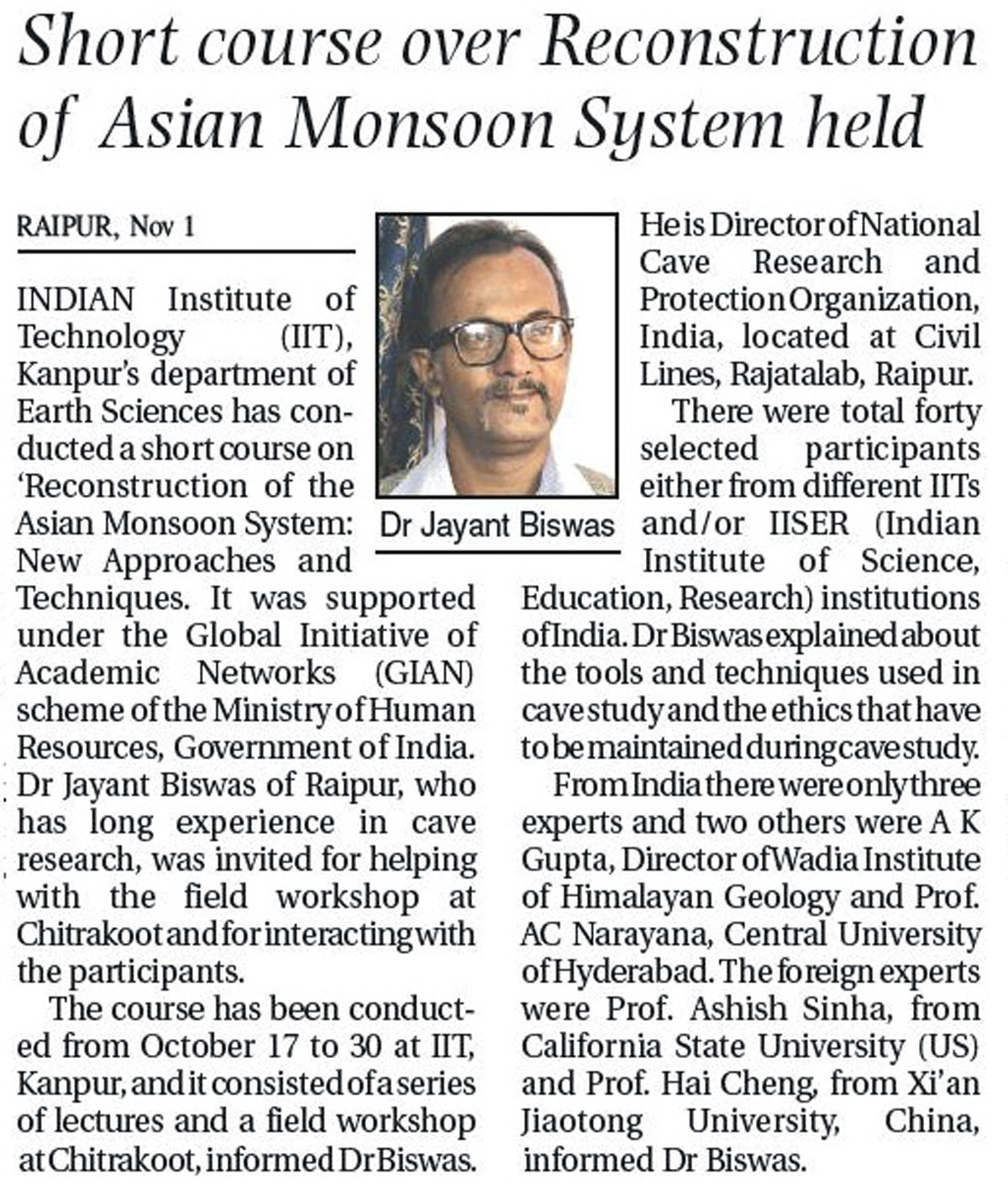 INDIAN Institute of Technology (IIT), Kanpur's Department of Earth Sciences has conducted a short course on `Reconstruction of the Asian Monsoon System: New Approaches and Techniques. It was supported under the Global Initiative of Academic Networks (GIAN) scheme of the Ministry of Human Resources, Government of India. Dr Jayant Biswas, Director of National Cave Research and Protection Organization, India, who has long experience in cave research, was invited for helping with the field workshop at Chitrakoot and for interactingwith the participants. The course has been conducted from October 17 to 30 at IIT, Kanpur, and it consisted ofa series of lectures and a field workshop at Chitrakoot, informed DrBiswas.

There were total of forty selected participants either from different IITs and/or IISER (Indian Institute of Science, Education, Research) institutions of India. Dr. Biswas explained about the tools and techniques used in cave study and the ethics that have to be maintained during cave study. From India, there were only three experts and two others were A K Gupta, Director of Wadia Institute of Himalayan Geology and Prof. AC Narayana, Central University of Hyderabad. The foreign experts were Prof. Ashish Sinha, from California State University (US) and Prof. Hai Cheng, from Xi'an Jiaotong University, China. 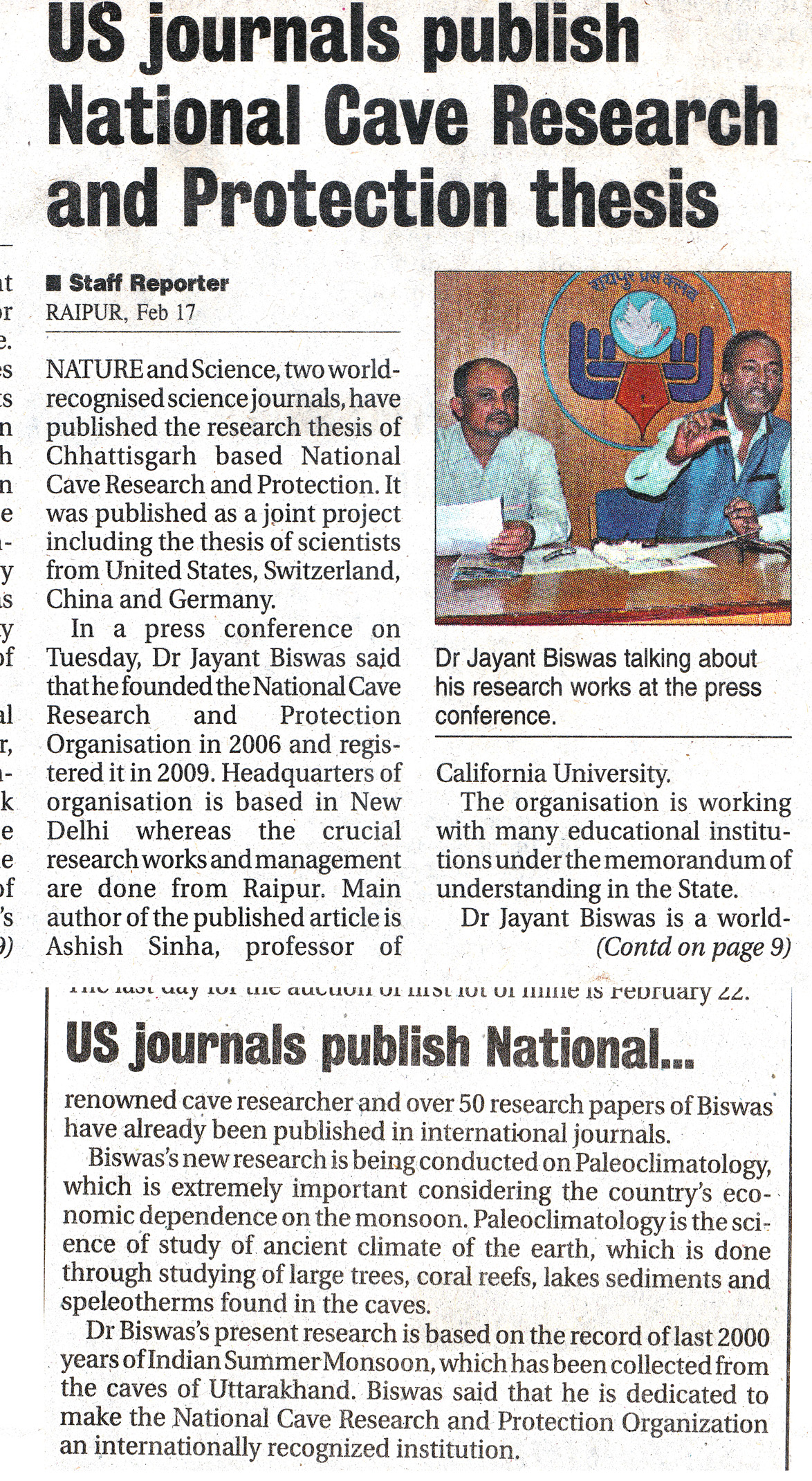 A Collaborative Research work of National Cave Research and Protection Organization published in Nature (communication): Nature and Science are the two worldwide recognized journals that publish the top level of science articles. Recently a collaborative work done by Dr. Jayant Biswas of the National Cave Research and Protection Organization with  Prof. Ashish Sinha of California university, US and Prof. Hi Cheng of Xi'an Jiotang University, China published in Nature. It is the first publication in NATURE from Central India.

The work was on Paleoclimatology based on the caves of Uttarakhand. The work stated about the 20-20 years of high rain and low rain cycles in India. 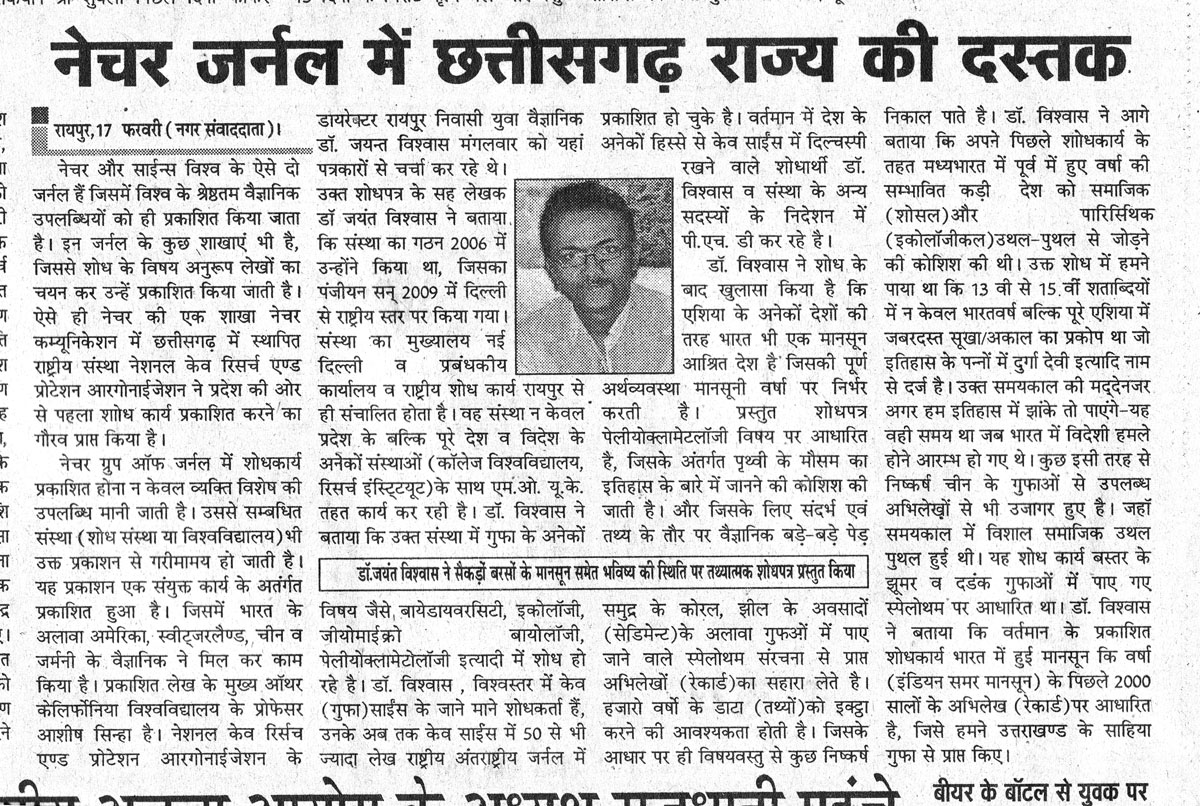 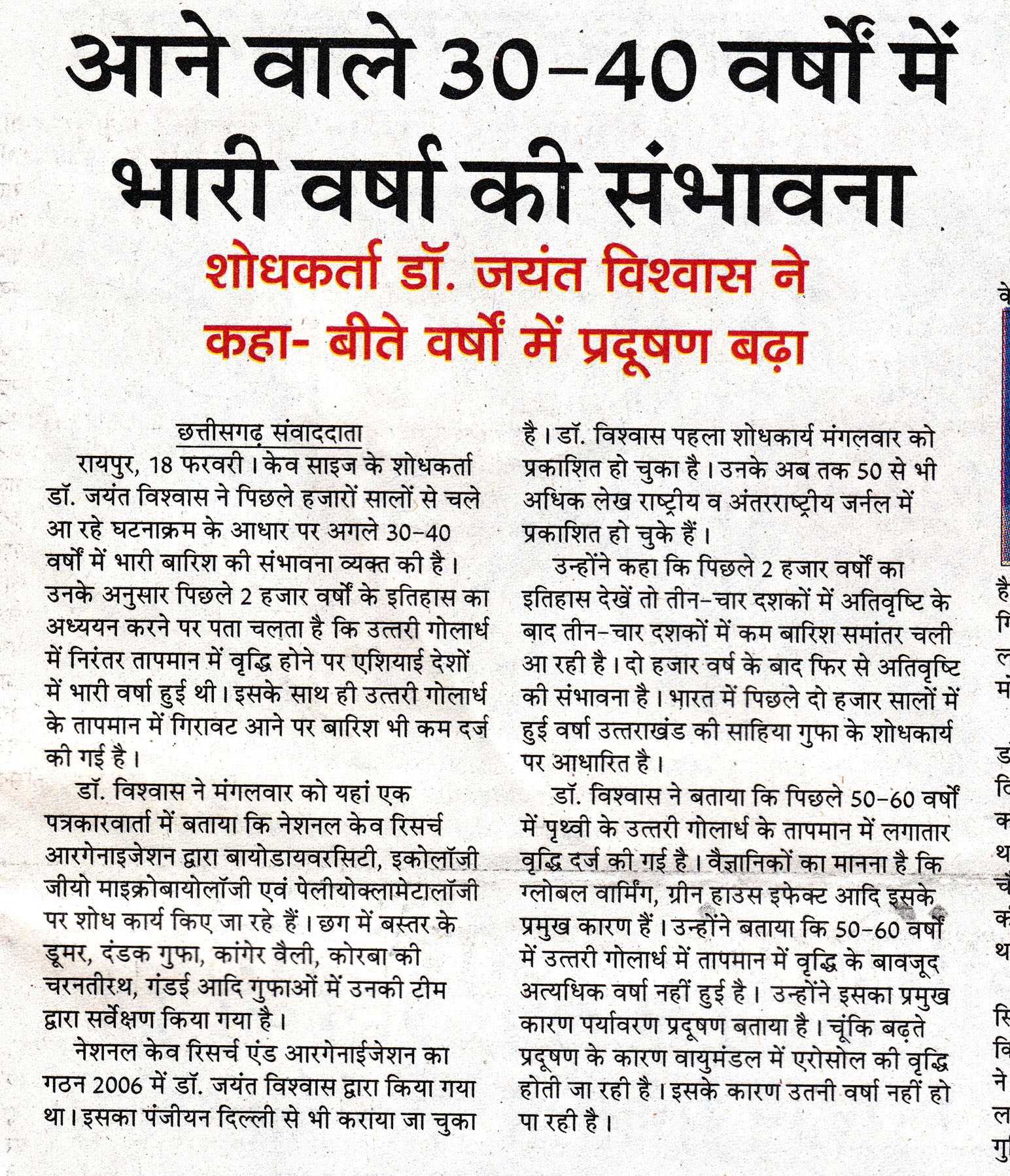 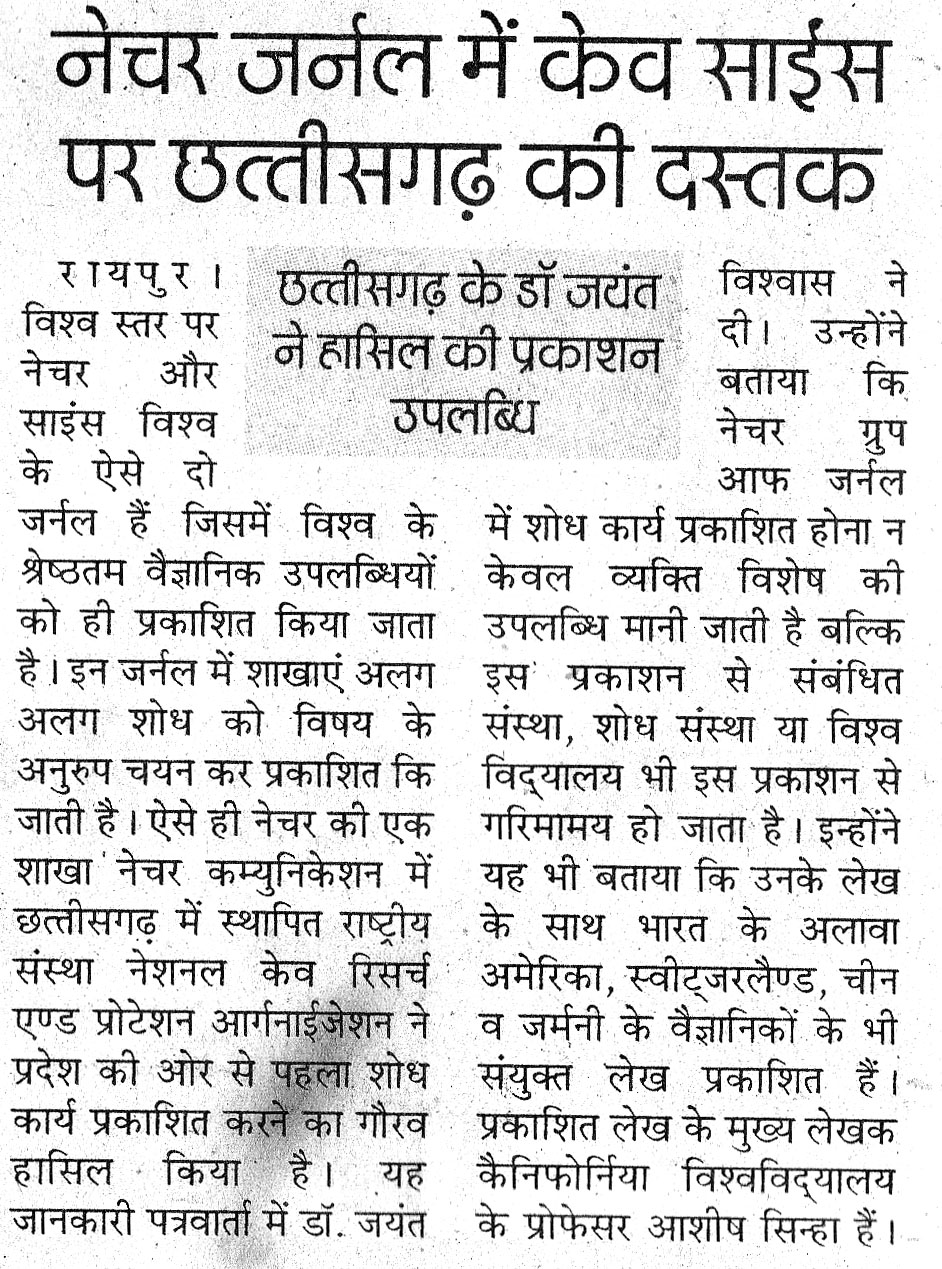 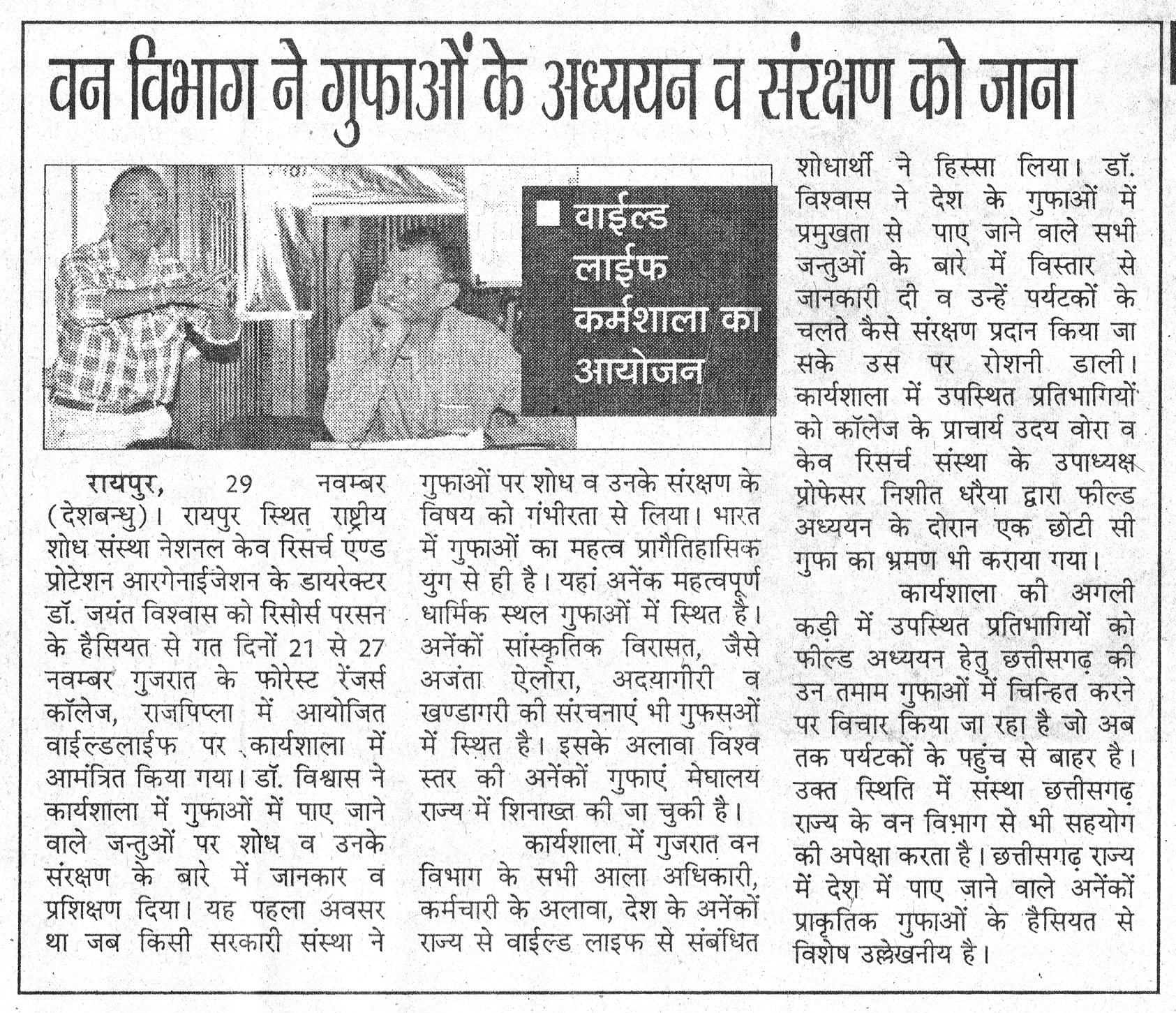 Dr. Jayant Biswas, director of National Cave Research and Protection Organization was invited as a resource person on a workshop on wildlife at Rangers' college, raj Pipla, Gujrat. It was the first time when any government organization took the subject of cave protection seriously. India has a wide array of caves scattered across the country, some of which are renowned worldwide. Dr. Biswas shed light on the types of animal species that abide inside the cave and how to protect them from anthropogenic pressures.
The workshop was attended by officials of the Forest department of Gujrat and upcoming research scholars engaged in wildlife research. The workshop was conducted by Dr. Nishith Dharaiya of Patan University, Gujrat and Vice president of National Cave Research and Protection Organization). 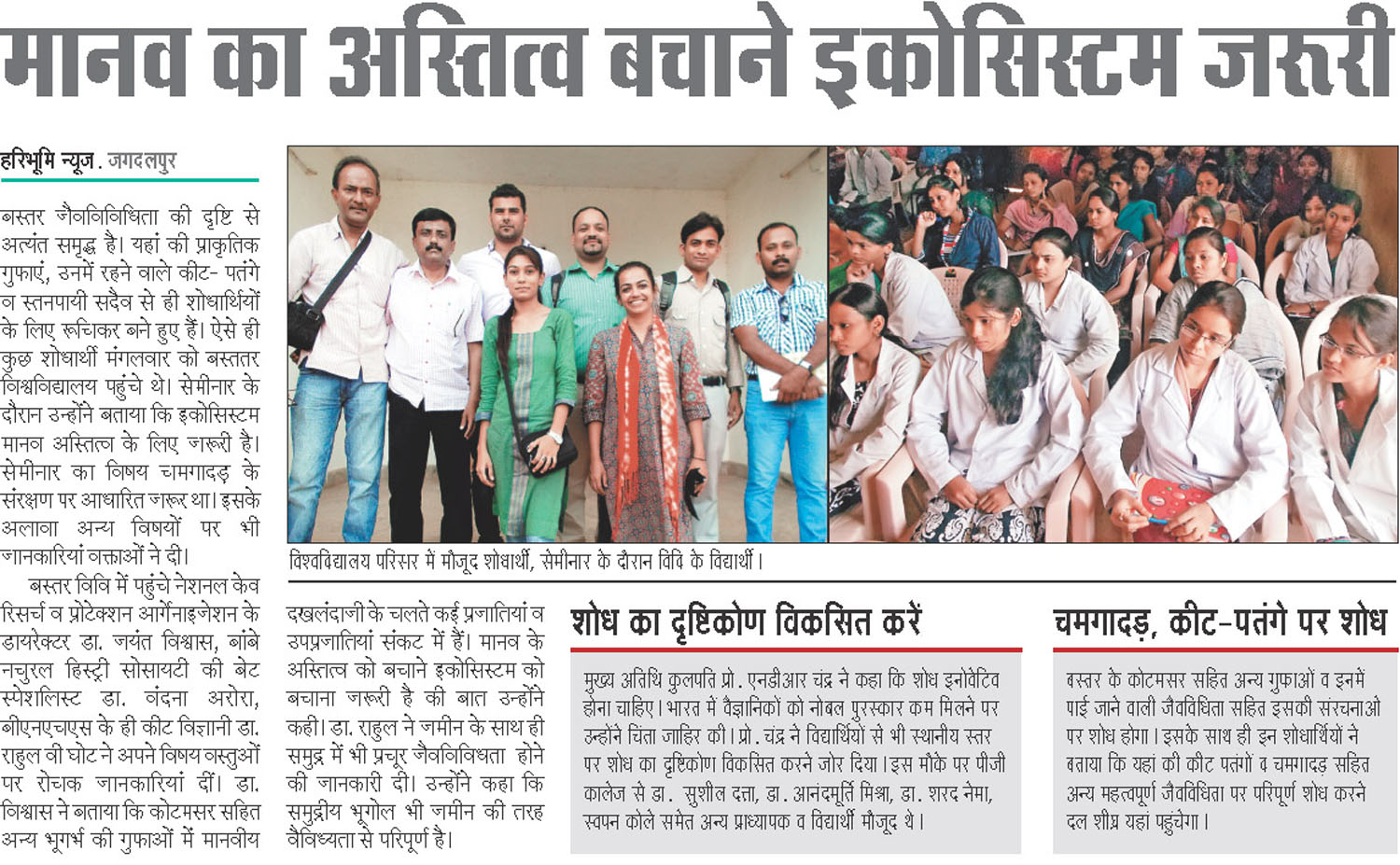 One day workshop is cave conservational issues with special emphasis on microchiropteran bat issue was organized by the National Cave Research and Protection Organization with the collaboration of Bombay Natural History Society in Bastar University, Jagdalpur, Chhattisgarh. The workshop was attended by the post graduation students of the University and PG students of science College, Jagdalpur. As a resource person, Dr. Jayant Biswas of Cave Org. and Dr. Rahul Khot and Dr. Bandana Aul of BNHS delivered their views. The workshop was also attended by Dr. Sushil Dutta of Science College Jagdalpur, Dr. Sharad Nema and Dr. S. Kole of Bastar University alongwith the Vice-Chancellor Prof. Chandra of the University. Dr. PRS Nagi (Veterinary Surgeon), Rajendra Gupta (Entomologist) and some research scholars from Hissar University specially attended the workshop. 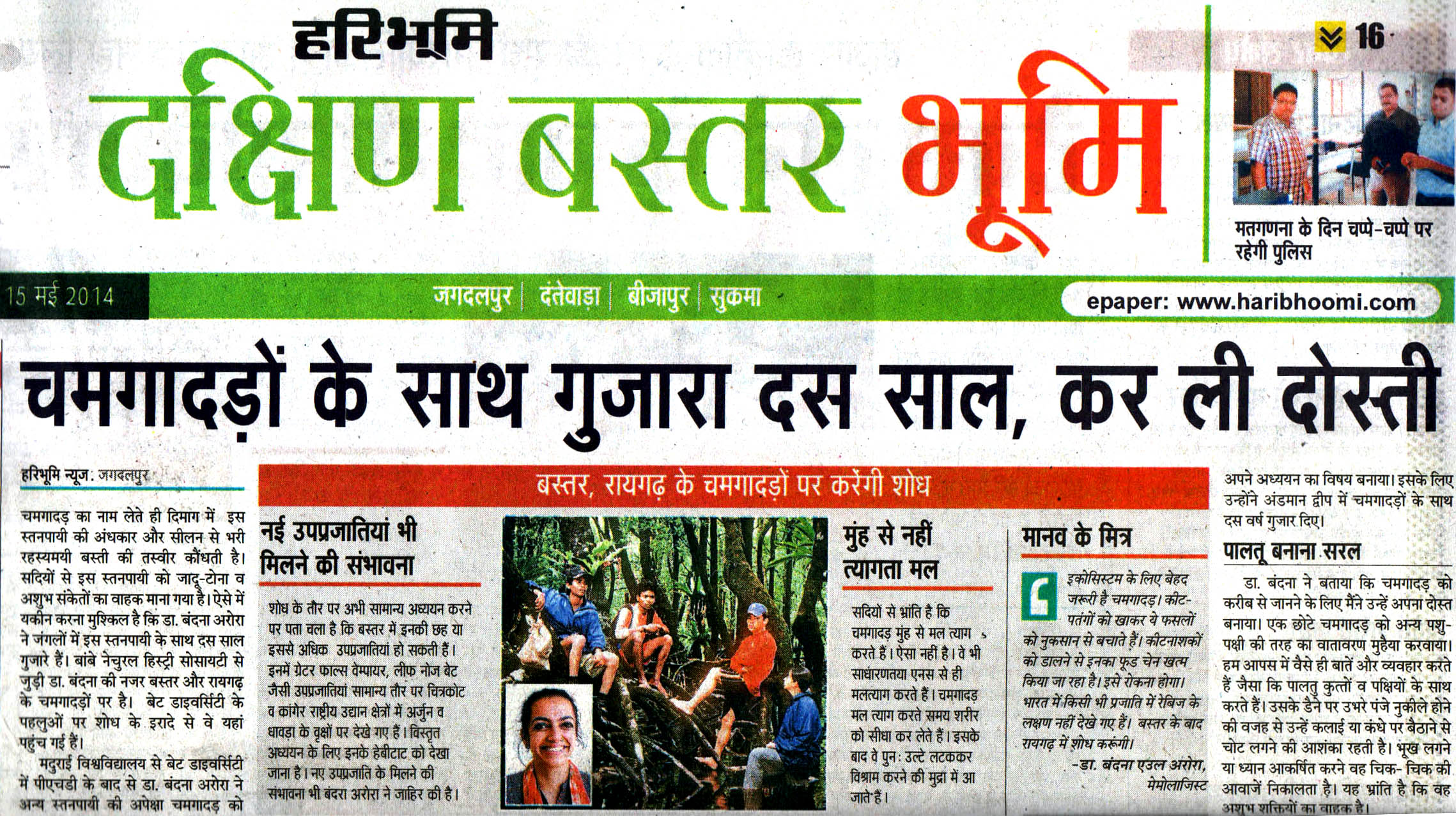 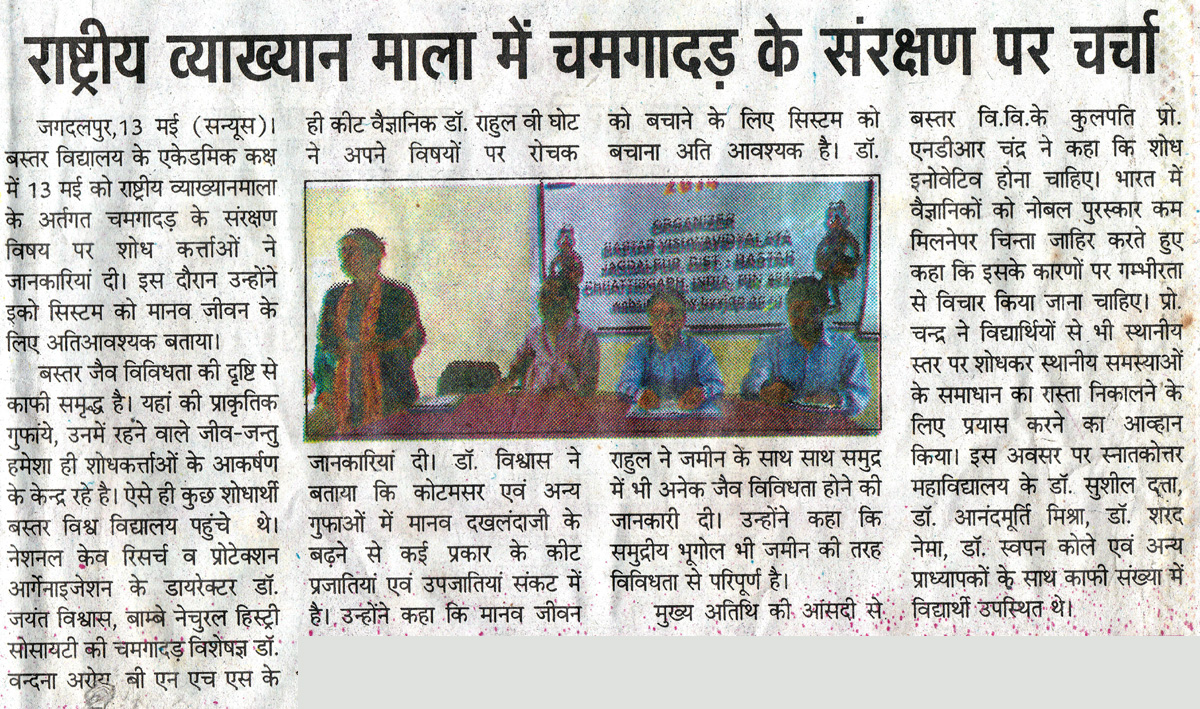 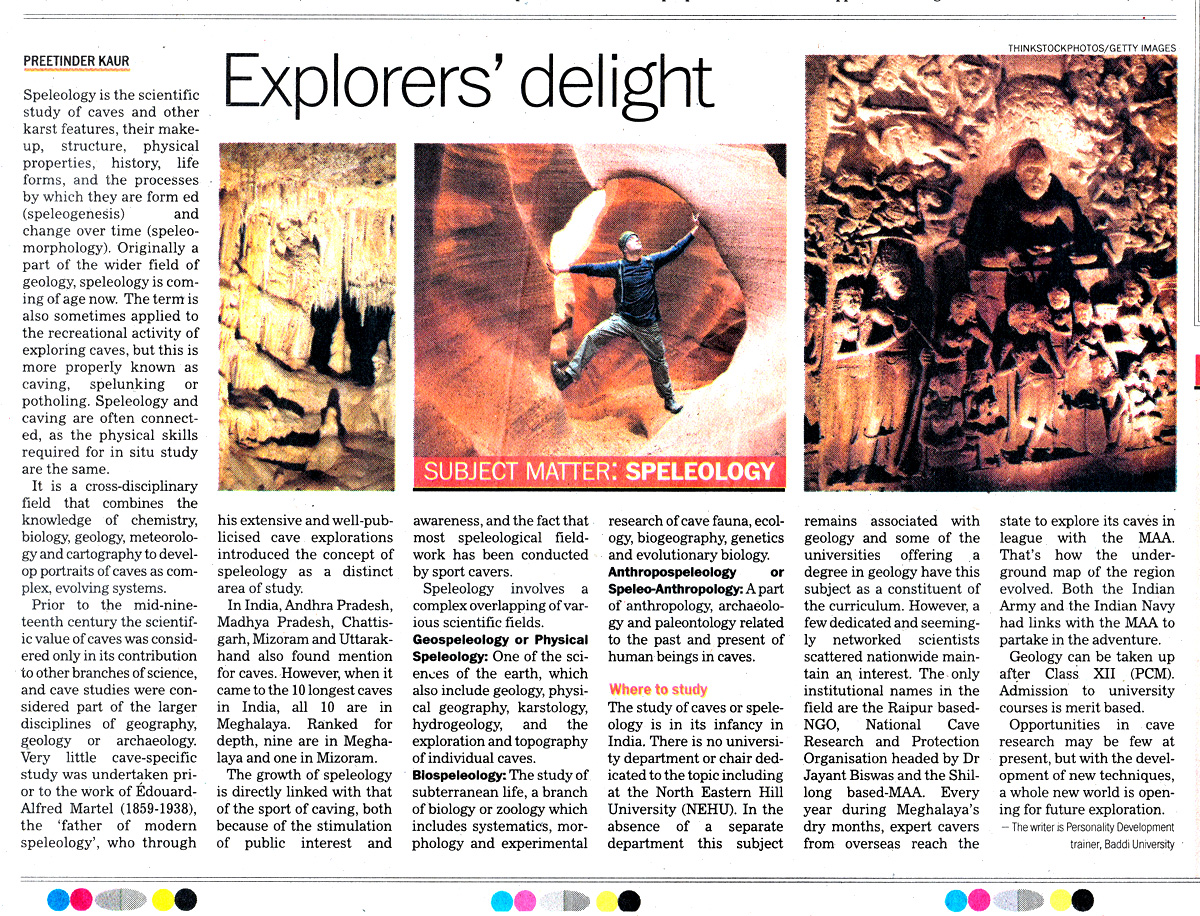 Speleology is the scientific study of caves and other karst features, their make-up, structure, physical properties, history, life forms, and the processes by which they are form ed (speleogenesis) and change over time (speleomorphology). Originally a part of the wider field of geology, speleology is coming of age now. The term is also sometimes applied to the recreational activity of exploring caves, but this is more properly known as caving, spelunking or potholing. Speleology and caving are often connected, as the physical skills required for in situ study are the same.

The study of caves or speleology is in its infancy in India. There is no university department or chair dedicated to the topic including at the North Eastern Hill University (NEHU). In the absence of a separate department this subject remains associated with geology and some of the universities offering a degree in geology have this subject as a constituent of the curriculum. However, a few dedicated and seemingly networked scientists scattered nationwide maintain an interest. The only institutional names in the field are the Raipur based-NGO, National Cave Research and Protection Organisation headed by Dr Jayant Biswas and the Shillong based-MAA. Every year during Meghalaya’s dry months, expert cavers from overseas reach the state to explore its caves in league with the MAA. That’s how the underground map of the region evolved. Both the Indian Army and the Indian Navy had links with the MAA to partake in the adventure.

Geology can be taken up after Class XII (PCM). Admission to university courses is merit based.

Opportunities in cave research may be few at present, but with the development of new techniques, a whole new world is opening for future exploration. 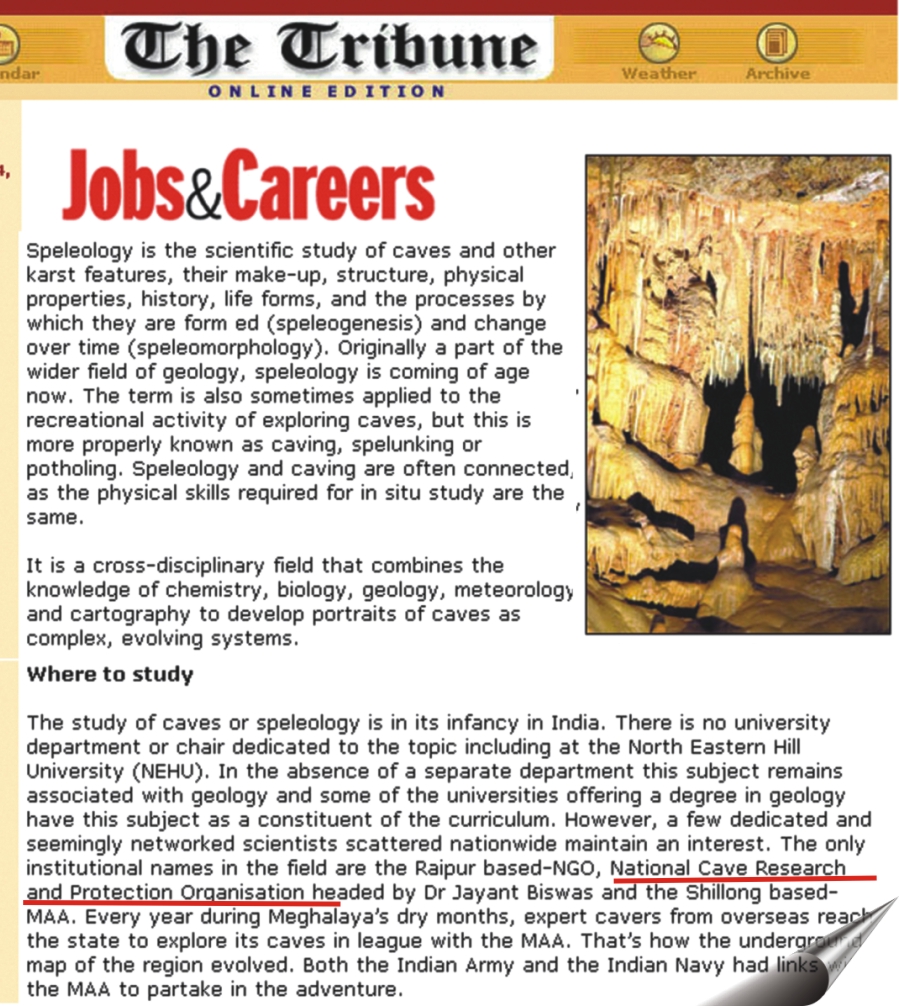 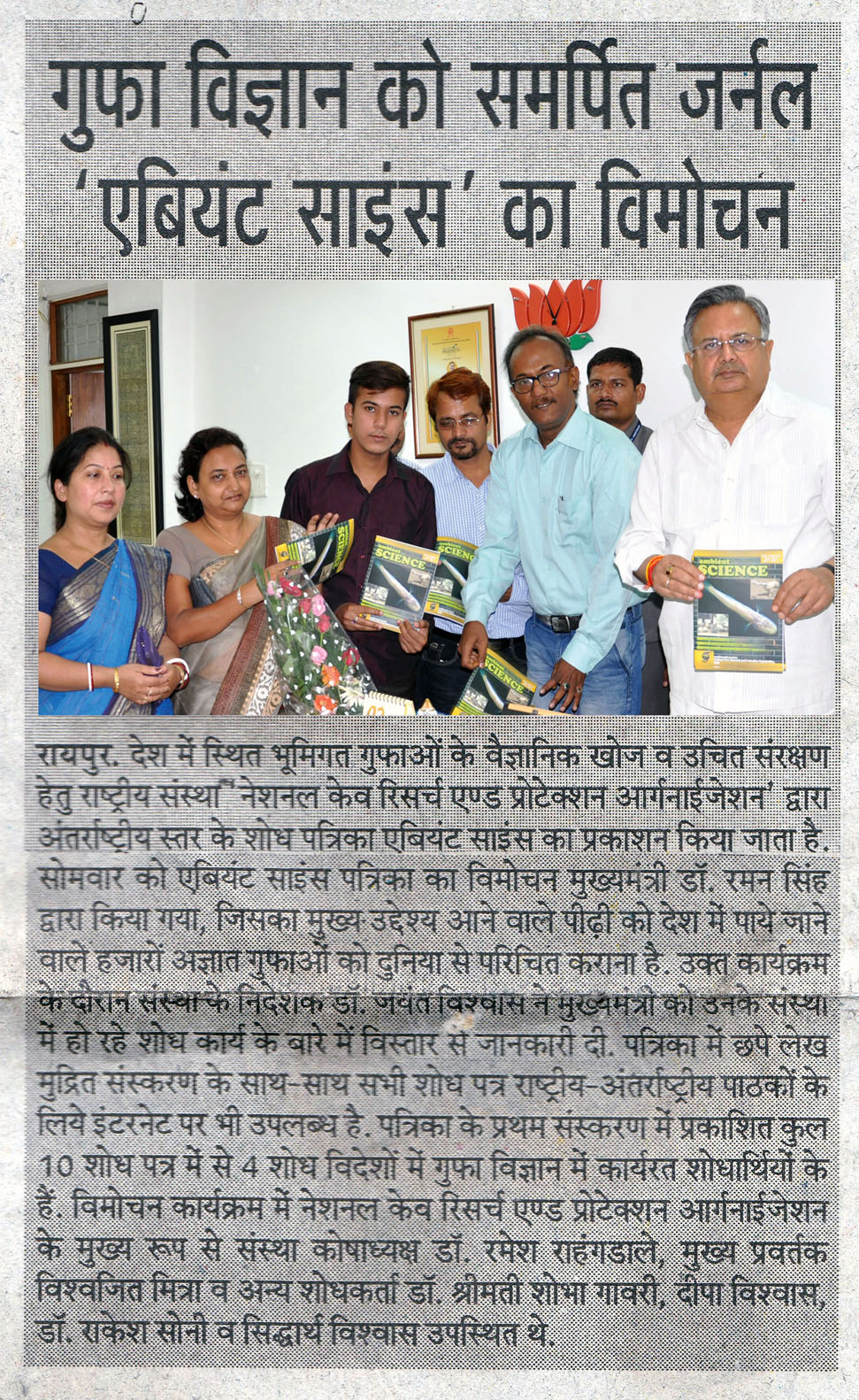 Chief Minister of Chhattisgarh Dr. Raman Singh inaugurated science journal Ambient Science in his office. The Journal is published by the National Cave Research and Protection Organization, India. CM congratulated the Office bearers to bring forth a journal on a lesser-known but interesting subject. Dr. Jayant Biswas is the chief editor of the journal. CM appreciated the work done by the organization ensured full support from the government. Ambient science is the only sole journal working towards the protection and conservation of the caves.  It is also a house of publication for national and international research work conducted on various aspects of the environment too. On this occasion secretary Dr. KK Harris, treasurer Dr. Ramesh Rahangdale, Social activist Mr. Vishwajeet Mitra, Dr. Shobha Gawri, Dr. Deepa Biswas, Dr. Rakesh Soni and Mr. Siddharth Biswas also present during the occasion. 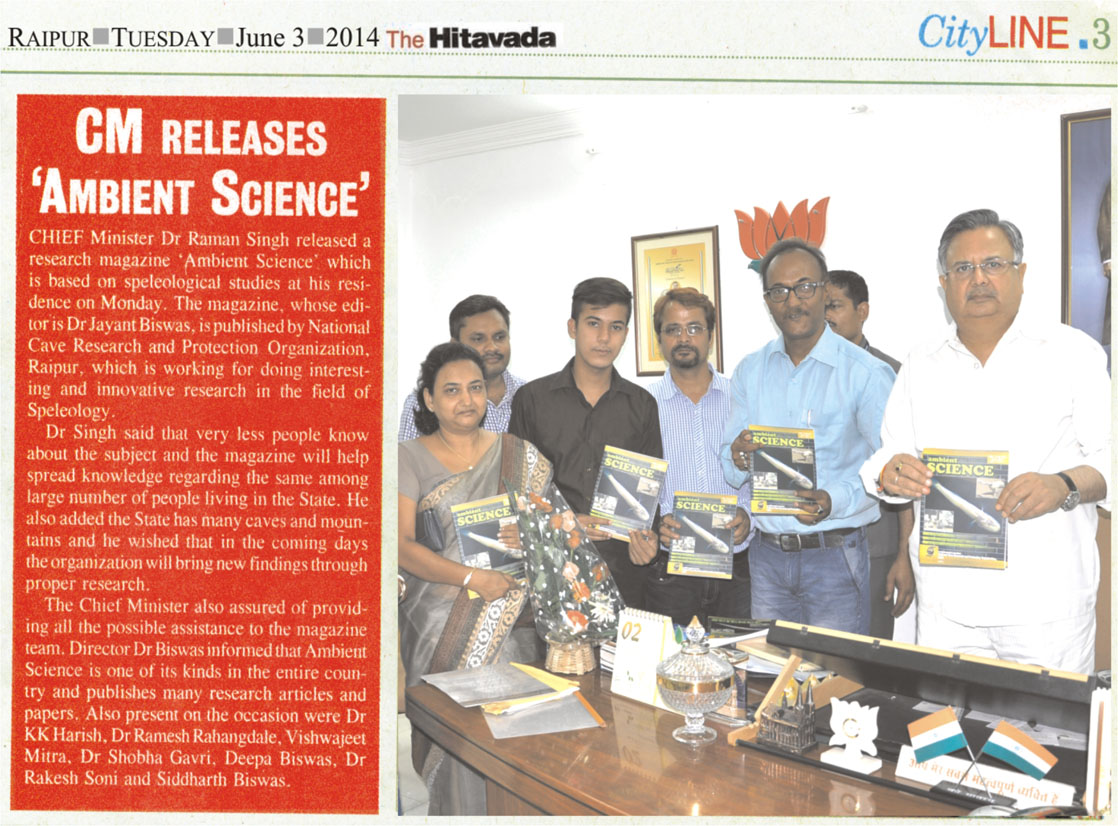 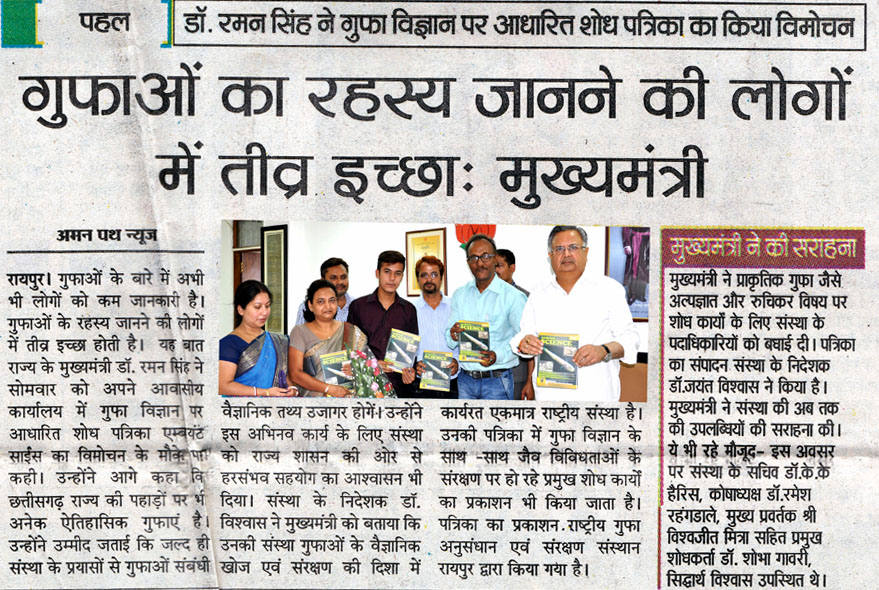 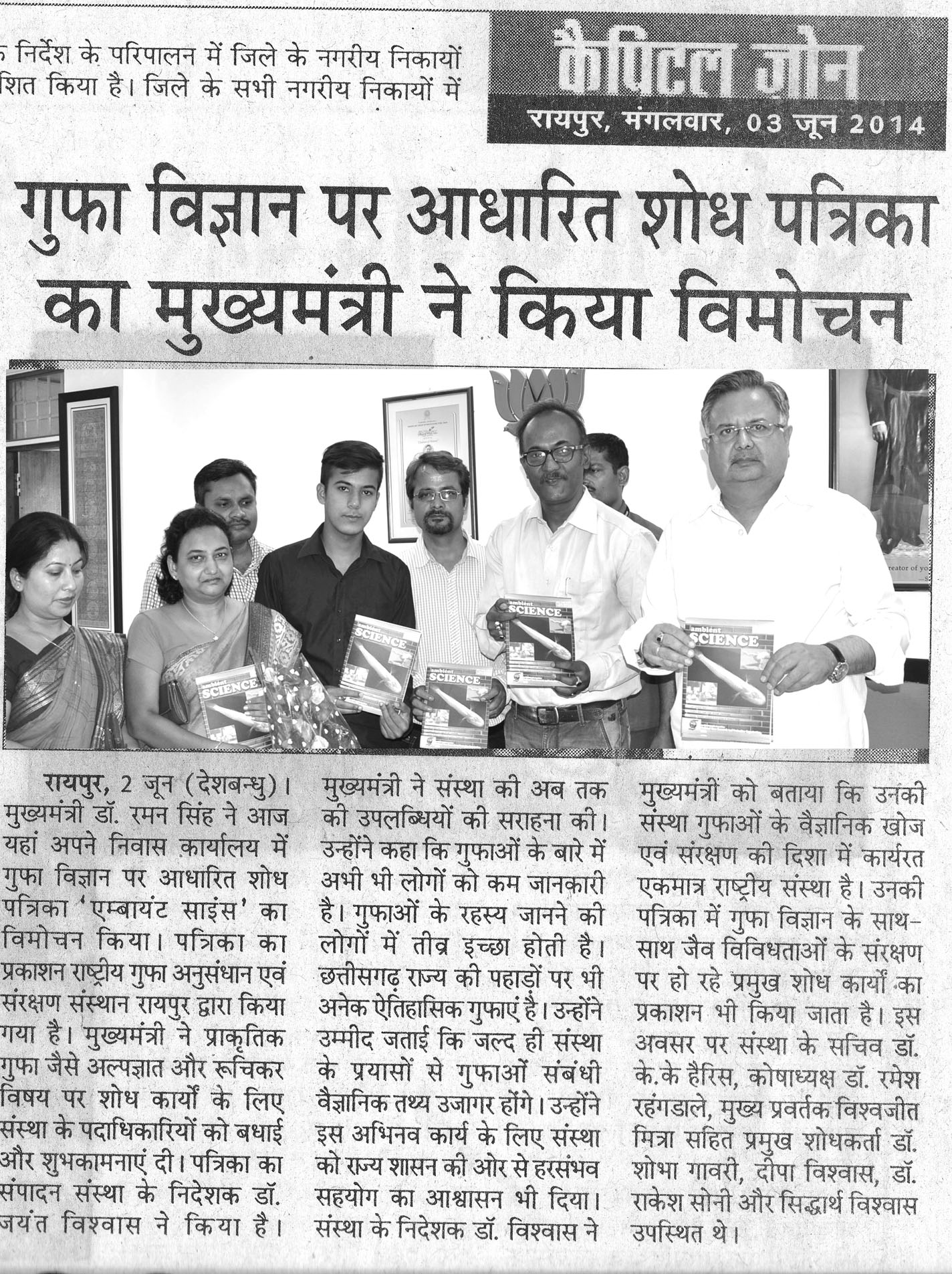 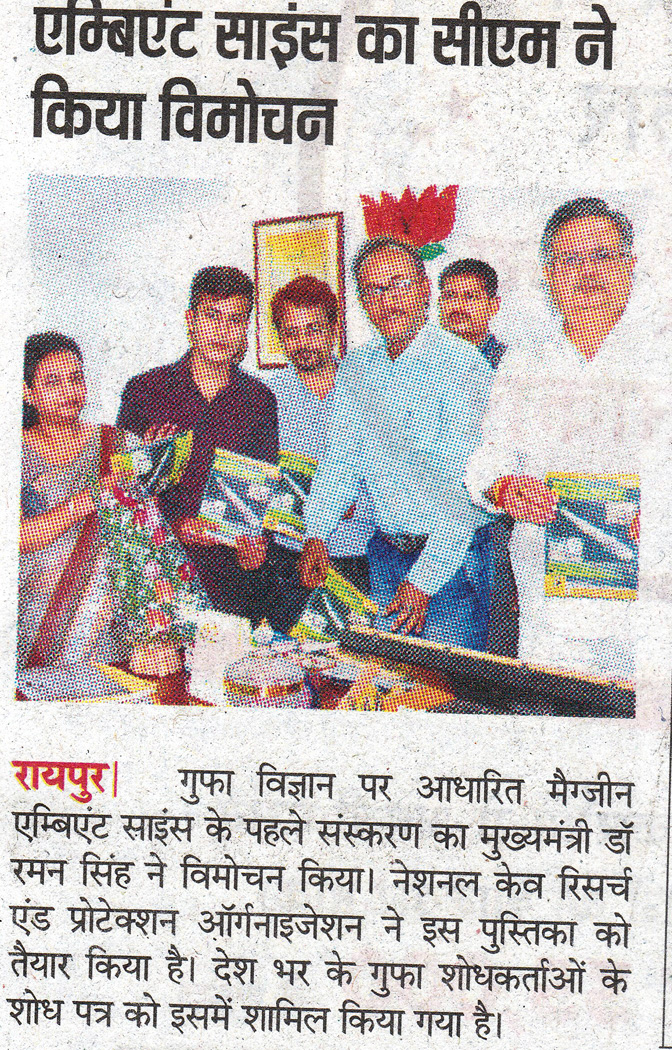 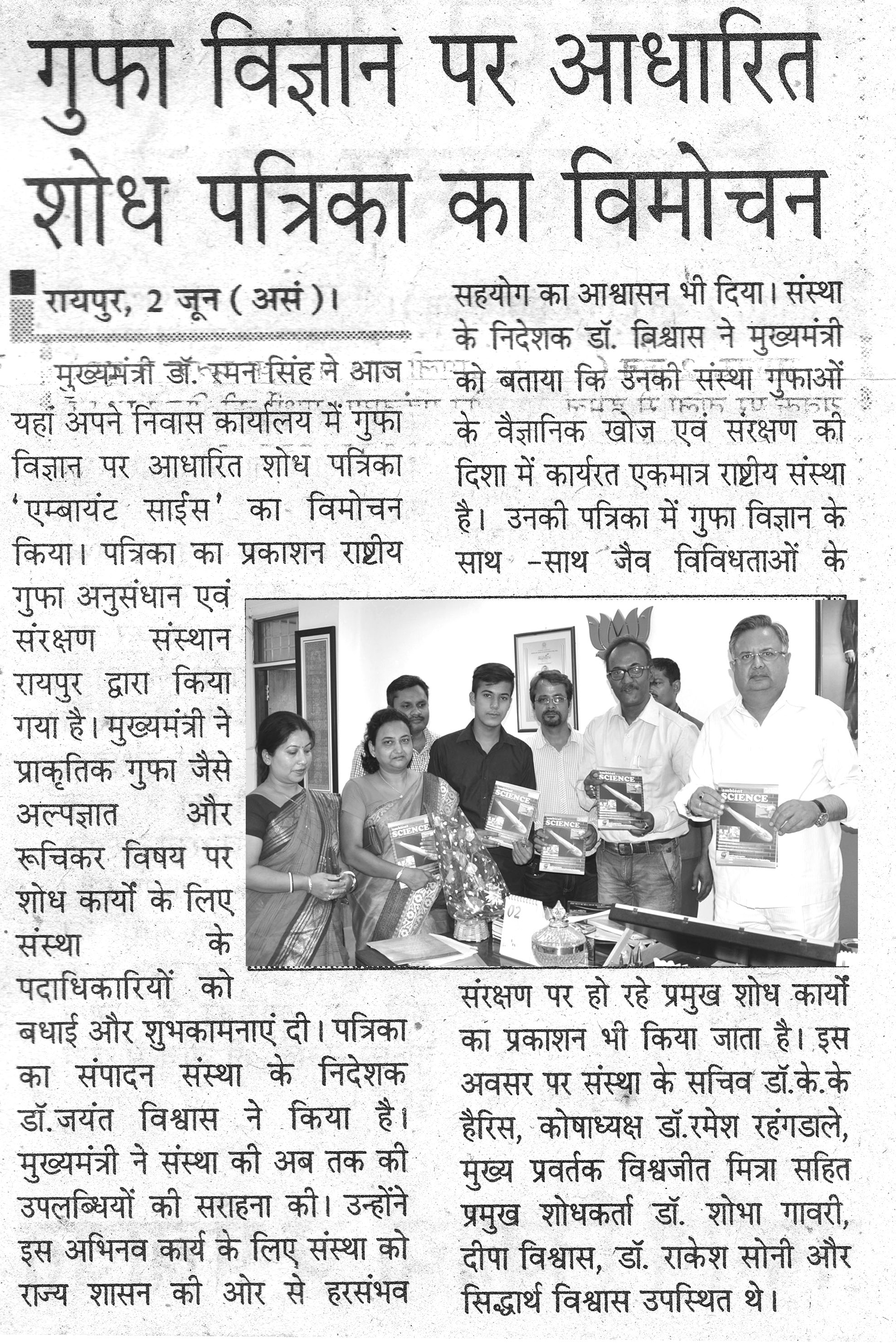 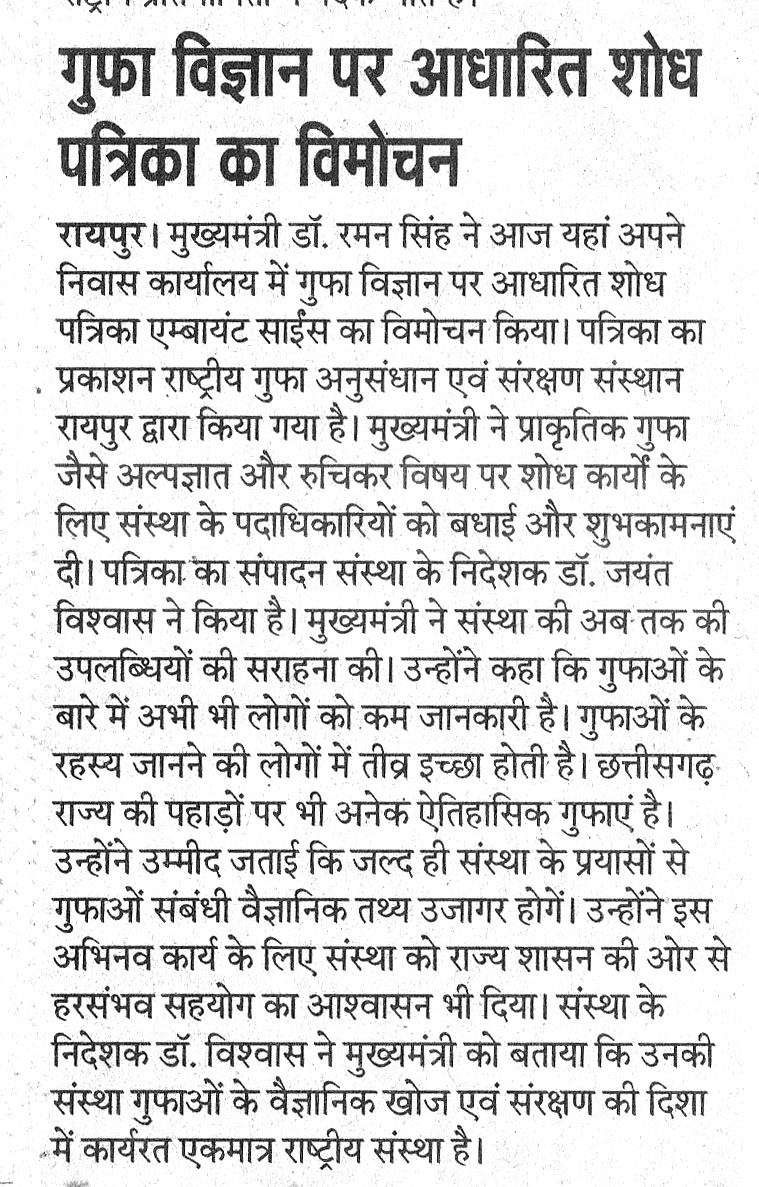 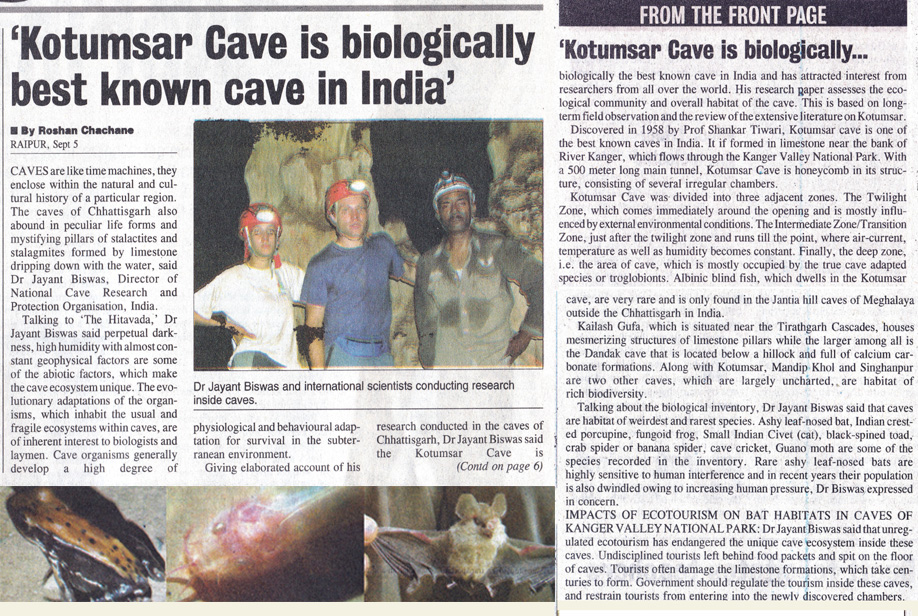 Caves are like time machines, they enclose within the natural and cultural history of a particular region. The caves of Chhattisgarh also abound in peculiar life forms and mystifying pillars of stalactites and stalagmites formed by limestone dripping down with the water, said Dr Jayant Biswas, Director of National Cave Research and Protection Organisation, India. Talking to ‘The Hitavada,’ Dr Jayant Biswas said perpetual darkness, high humidity with almost constant geophysical factors are some of the abiotic factors, which make the cave ecosystem unique. The evolutionary adaptations of the organisms, which inhabit the usual and fragile ecosystems within caves, are of inherent interest to biologists and laymen. Cave organisms generally develop a high degree of physiological and behavioural adaptation for survival in the subterranean environment. Giving elaborated account of his research conducted in the caves of Chhattisgarh, Dr Jayant Biswas said the Kotumsar Cave is biologically the best known cave in India and has attracted interest from researchers from all over the world. His research paper assesses the ecological community and overall habitat of the cave. This is based on long-term field observation and the review of the extensive literature on Kotumsar. ........................................ 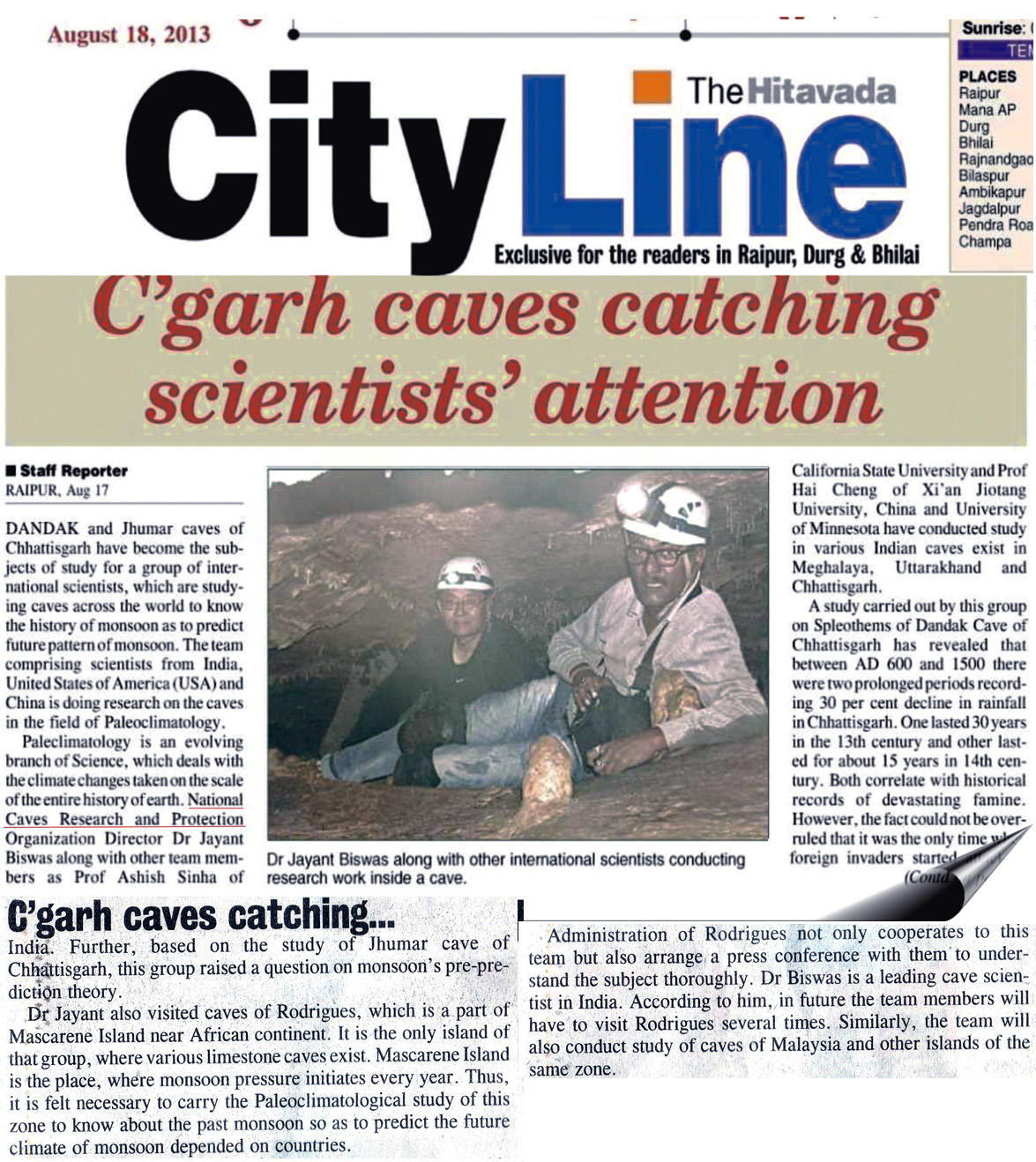 Dr. Jayant Biswas, a part of research on Mascarene Island (News covered by all the leading News Papers of Raipur)

Scientist from Raipur Dr. Jayant Biswas, Director, National Cave Research and Protection Organization, India a part of international researcher group conducting research on Monsoon activities in Asian countries. The field of their study is referred to as Paleoclimatology. The other members of the group are Prof. Hi Cheng of Minnesota University, US, Prof. Ashish Sinha of California University, US. Recently they visited Rodrigues, an island of Mascarene island groups from where the monsoon pressure develops every year. Besides the other parts of the world, this group is actively working on the caves of Chhattisgarh, Meghalaya and Uttarakhand of India. 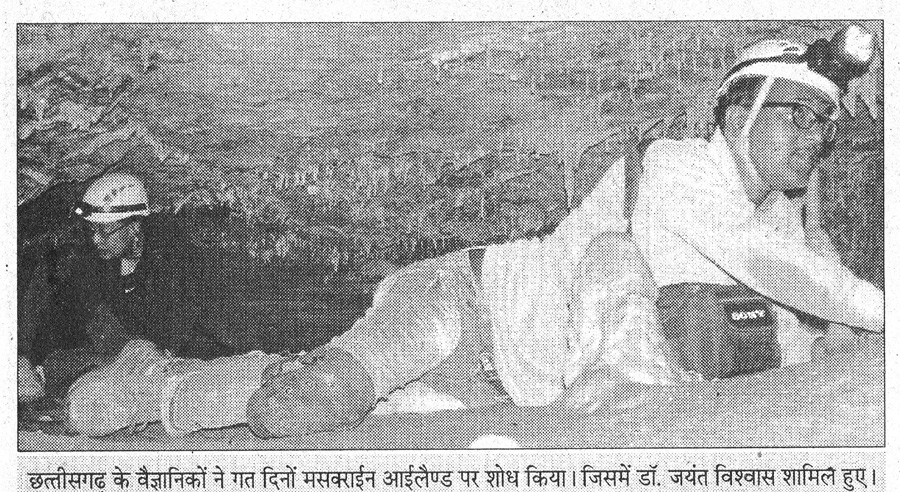 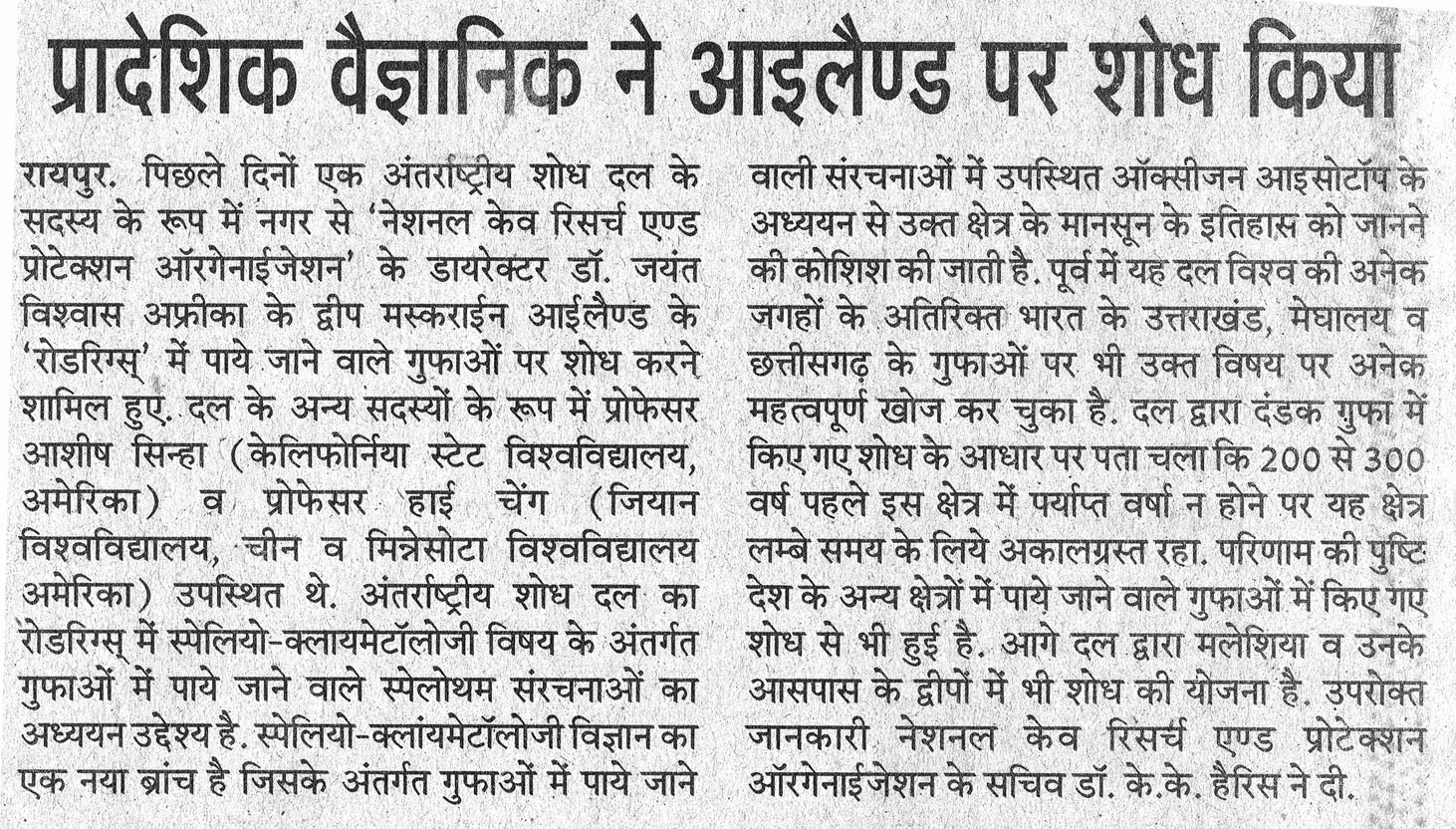 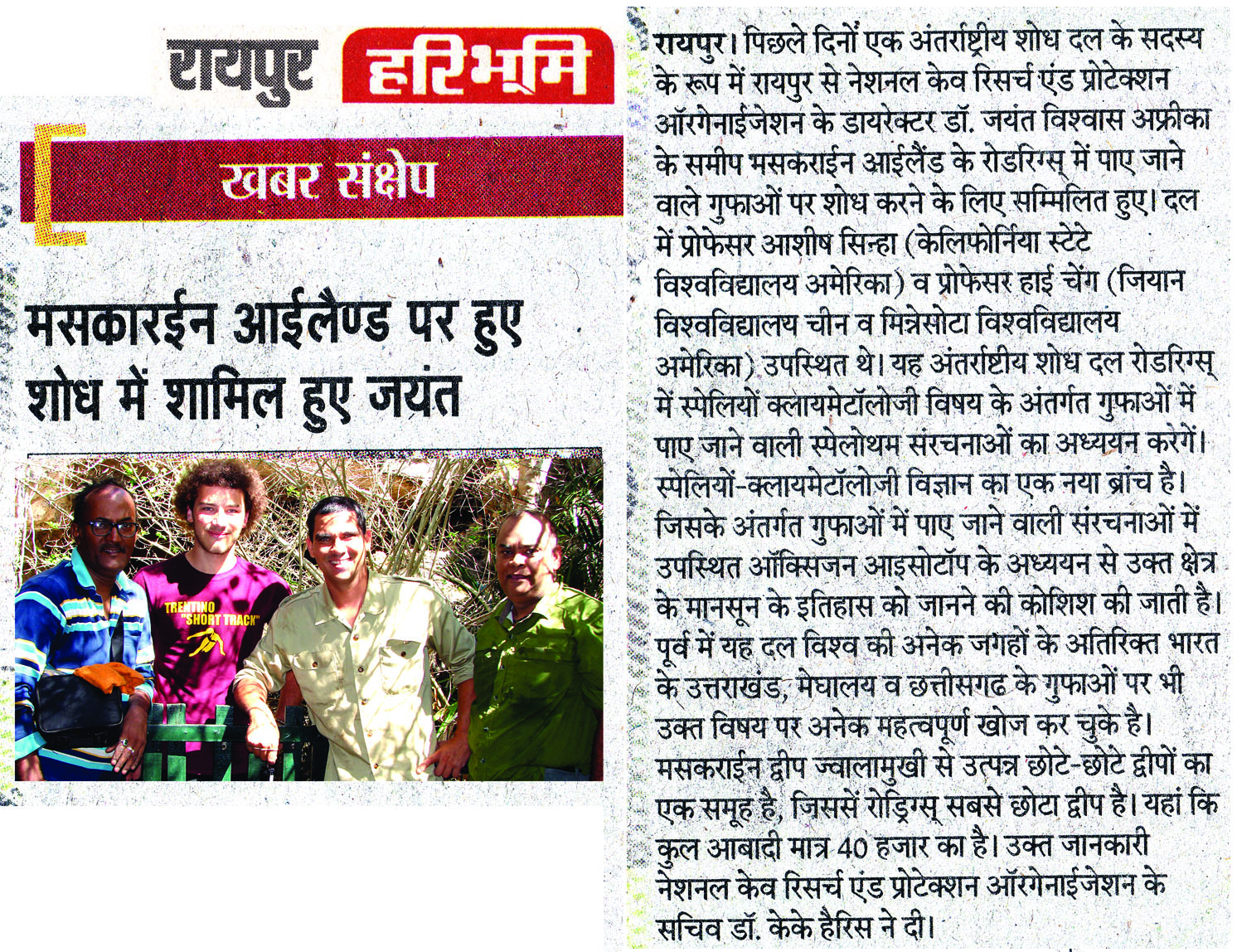 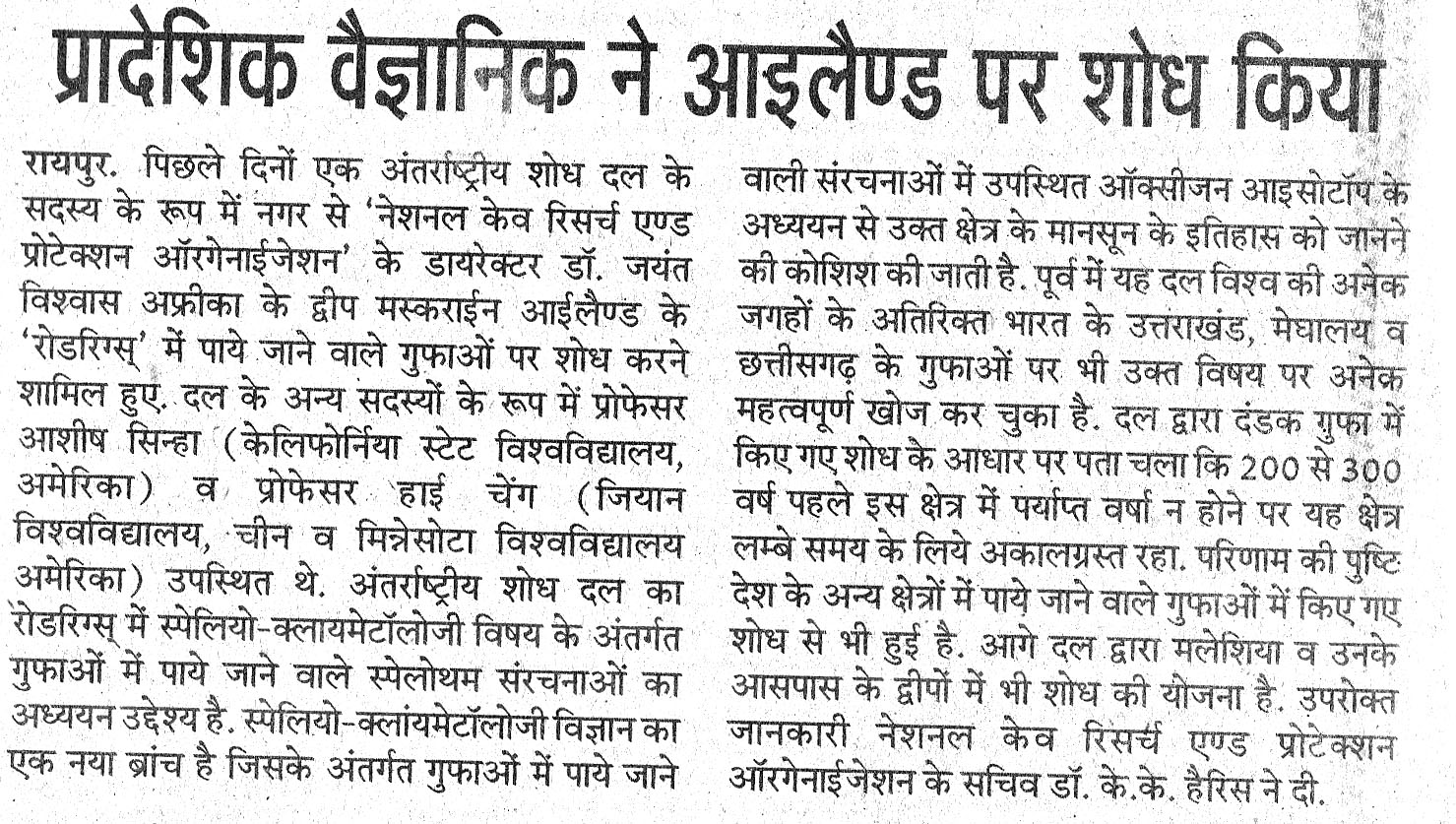 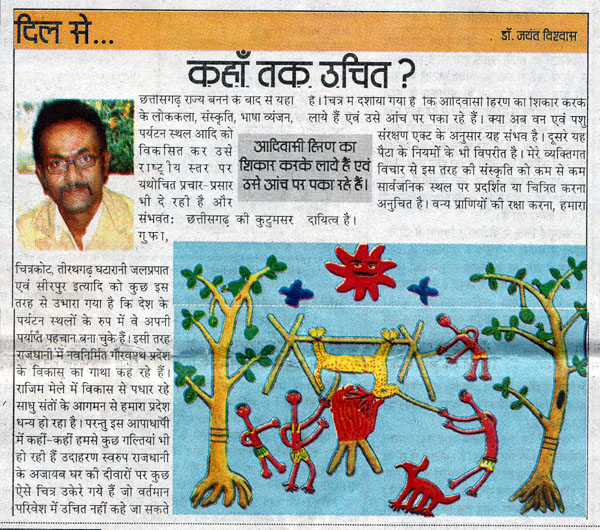 कहा तक उचित? How far it is admissible?

Dr. Jayant Biswas of National Cave Research and Protection Organisation requested the government not to promote publicly such few portraits which show the hunting of wild animals. In nowadays in the name of folk arts, painting in the wall of government monuments in Chhatisgarh is going on. In this regard hunting of deer by tribals has also been focused and it is against the law now.
We must protect our wildlife not to kill. Instead of such art, we must highlight our heritage sites like Kotumsar, Dandak, Kailash caves, Tirathgarh, Chitrakot waterfalls etc.