Other than research activities, time to time covered by Media (NewsPapers).

An interview with International Scientists of Paleoclimatology :

Scientists are trying to know the reasons behind the megadroughts which took place 1000 years ago s that we can prepare ourselves for the future to meet such challenges. After suffering from mega-drought of 1876, the British government in the year of 1877 established The Indian Meteorological center in India.

In Nainital the International Scientists, Dr. Ashish Sinha from California university, US, Dr. Jayant Biswas from National Cave Research and Protection Organization, India & Prof. Hi Cheng from Xian Xingtom University, China reached and along with research scholar of Nainital Ms. Gayatri Kathyat met the Press.
They told that from Uranium & thorium they verifying the age of the caves, but it is too expensive.
Dr. Biswas said that due to lack of proper facilities, expertise and even funding we are doing research jointly with the eminent scientists of other countries. 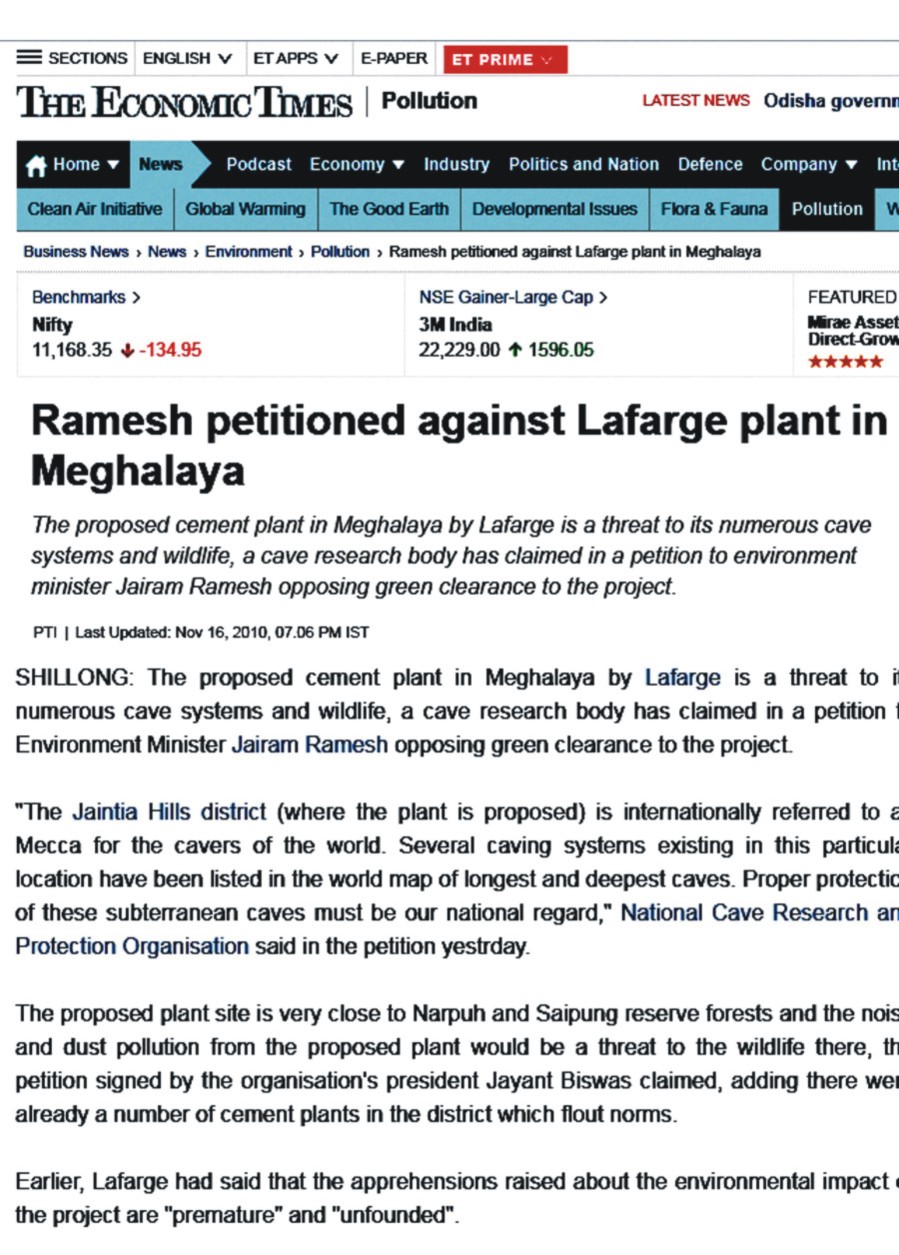 A cave research body recently urged the Indian Environment and Forest Minister Jairam Ramesh not to give environmental clearance to French company Lafarge's proposed mega cement plant in Meghalaya. National Cave Research and Protection Organisation in its petition to Jairam said the proposed cement plant poses a threat to numerous cave systems and wildlife in northeastern Indian state of Meghalaya.
”The Jaintia Hills district (where the plant is proposed) is internationally referred to as the Mecca for the cavers of the world. Several caving systems existing in this particular location have been listed in the world map of the longest and deepest caves. Proper protection of these subterranean caves must be one of our national regard,” the cave research body said in the petition.
Urging the Indian government to consider the facts before taking any decision on environmental clearance to the plant, it said, “We are not even aware of two percent subterranean biodiversity abiding in these caves but we are leaving them to get extinct”.
The proposed plant site is very close to Narpuh and Saipung reserve forests and the noise and dust pollution from the proposed plant would be a threat to the wildlife there, the petition signed by the organisation's president Jayant Biswas said.
Besides, the contaminated water to be discharged by the plant would lead to degradation of the land known for good rice productivity, it said.
There were already a number of cement plants in the district which flout norms, it added.
Earlier, Lafarge had said the apprehensions raised about the environmental impact of the project are 'premature' and 'unfounded'.
The project would maintain the highest standards of environmental protection and use scientific mining techniques as per the best international practices.
Besides, the project would not progress without conducting a proper environmental impact assessment and obtaining all statutory clearances, the French company had said in a statement.
Lafarge India Eastern Ltd, a wholly owned subsidiary of Lafarge India Pvt Ltd, had got a single window clearance from Meghalaya government for it's proposed 1.1mt integrated cement plant at Nongkhlei in the limestone rich Jaintia Hills district.
The French company's limestone mining project in the state is shut since February following an apex court order on a petition filed by an NGO alleging that Lafarge's mining activities violated the constitutional provision against handing over tribal land in the northeast to non-tribals.
It had also alleged that the company had obtained environmental clearance by falsely showing thickly-forested land as wasteland. 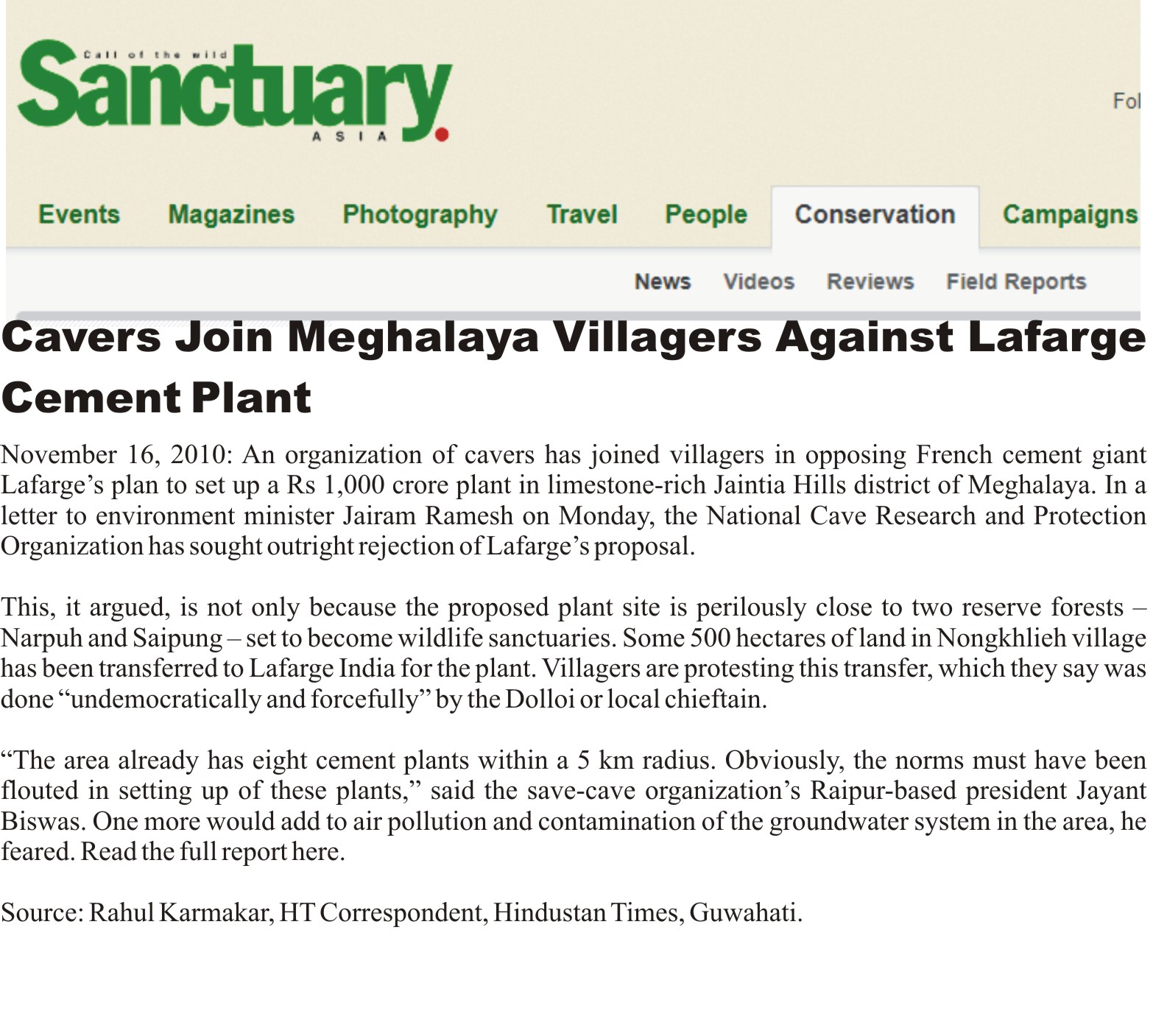 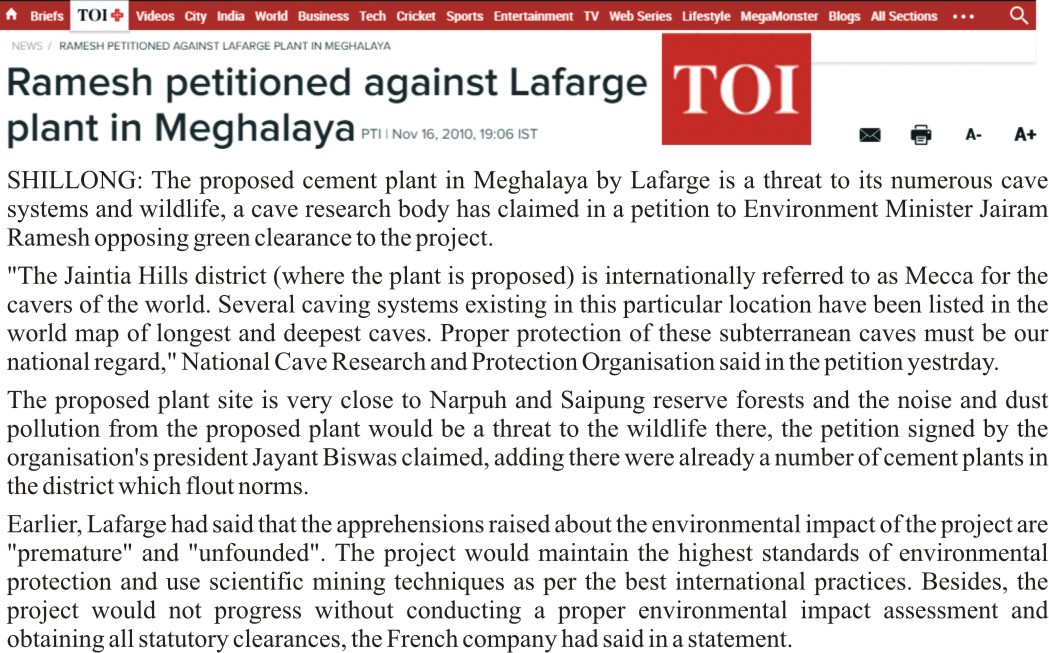 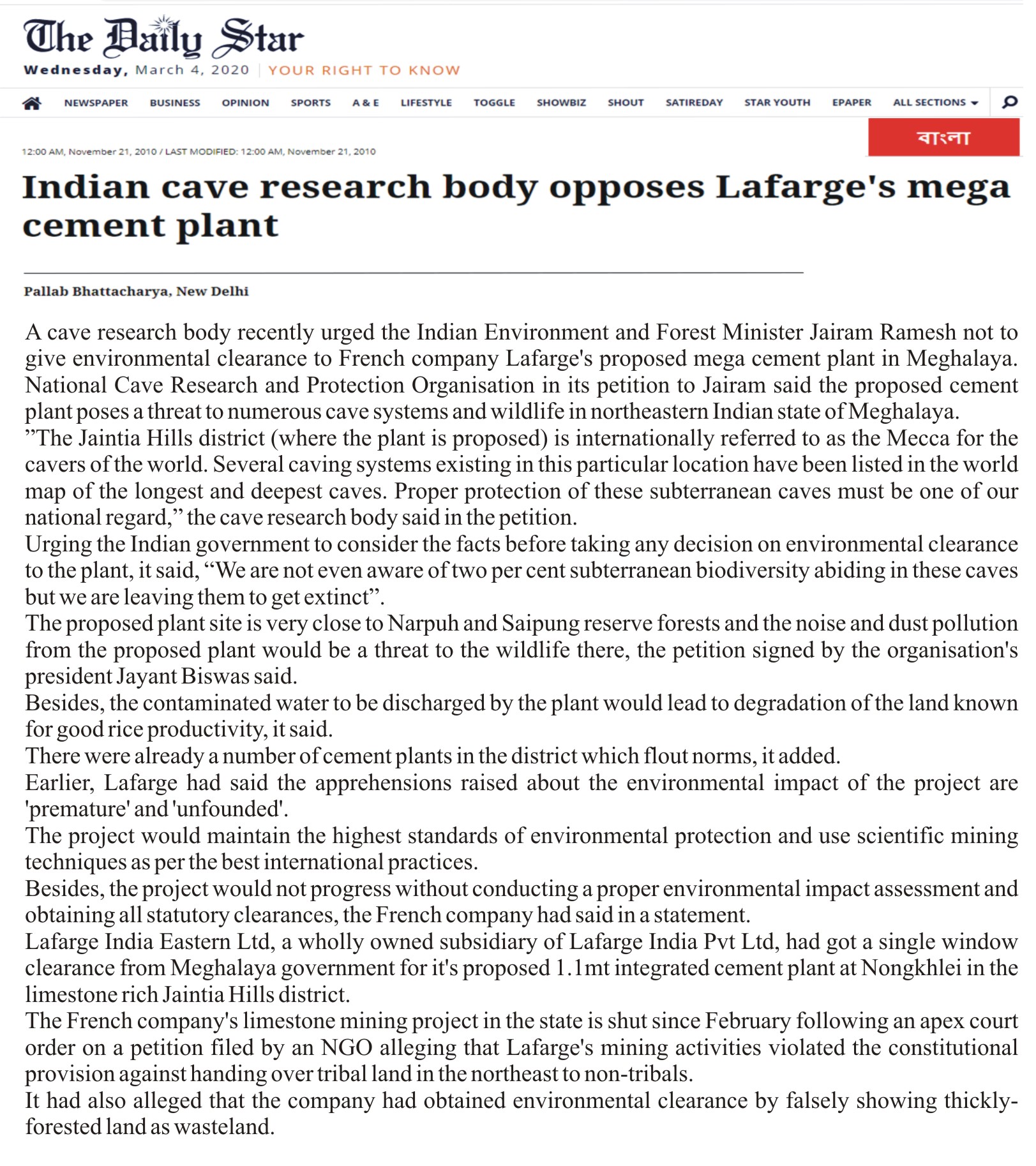 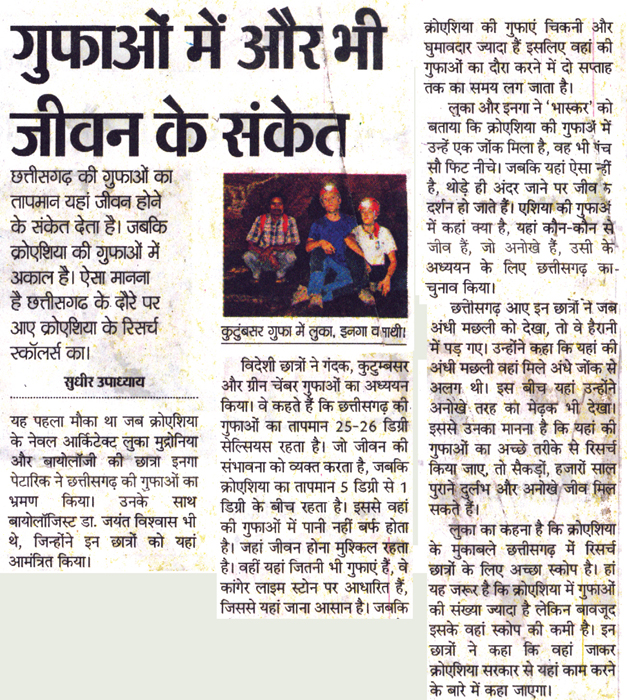 Cave researcher "Inga Patarcic" and her co-scholar Luca visited Chhattisgarh from Croatia for cave visits and to know the research techniques the Indian use for cave studies under a research exchange program. Both of them visited Kotmsar, Dandak, Kailash and other caves of Kanger Valley National Park. They talked with Dainik Bhaskar reporter and told that caves of tropical countries like Kotumsar and Dandak are the mines for Biospeleological studies as here temperature remains in between 25-26 degree C round the year. Whereas in Croatia it is always between 1-5 degree C, but the number of caves in Croatia in Karst areas are too high as compared to Kanger Valley. They told about their finding of a cave leech which they recovered from 100 m depth of a cave of Croatia. They were amazed to see the blind fish of Kotumsar cave and request to take the measures for their conservation to the director of the Organization Dr. Jayant Biswas.